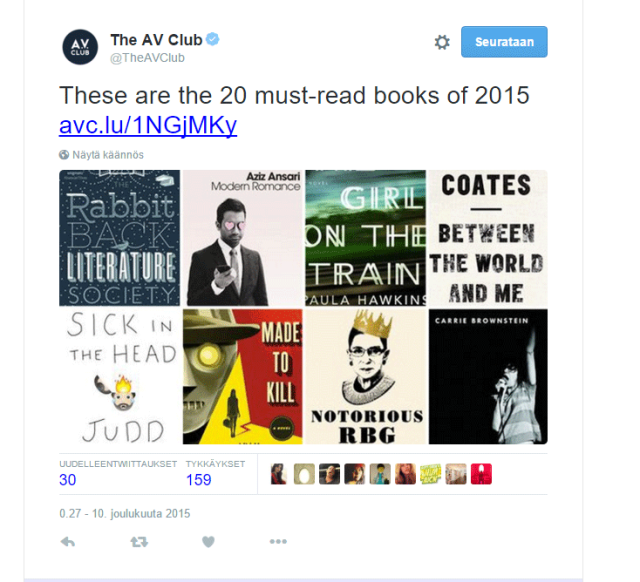 Okay, this is a very nice surprise: my first novel (and my first translated work) The Rabbit Back Literature Society is among the 20 must-read books in 2015, according to The AV Club.

The Finnish version, Lumikko ja yhdeksän muuta, was published in 2006, so the book itself is kind of water under the bridge to me, but this U.S. version of it means a lot to me and it’s very heartwarming to see that this little quirky story of mine has been noticed abroad – and especially in USA.

So, thank you so much, dear AV Club and especially Caitlin PenzeyMoog!

Hopefully my later works will also be translated and published in USA, there are two other novels waiting so far, and I’m working my ass off with the fourth one.

These other novels are:

about The Cinematic Life – a novel

Olli Suominen is a children’s book publisher, a member of the local church council, a husband and a father. In every way a respectable, honest and decent guy, a trusted member of society.

Behind this irreproachable facade, Olli is bored, moving through life in stupor day after day. His relationship with his wife, Aino, a school teacher, has faded to routine and his little son, Lauri, feels like a stranger to him.

The change comes when Olli contacts his long-lost childhood sweetheart, Kerttu, on Facebook. Kerttu has become a famous writer and her next book, The Magical City Guide, is due to be published by Olli’s publishing house.

Little by little Olli slips out of his numbing workaday life into a free fall. Dramatic, suppressed childhood memories resurface. Dreaming and wakefulness intermingle. A feeling of bleakness is replaced by powerful passions.

In The Cinematic Life – a novel Jääskeläinen has conjured up a magnetic, ambience-filled experience. The novel’s emotional range extends from melancholy to melodrama and horror; there is also a touch of a Famous Five feeling thrown in – however these Famous Five are not like the ones we’re used to know…

Jääskeläinen has a talent for knocking everyday life out of joint, elevating it to a magical yet credible level.

There is a catch at the end of the book. Two identical-looking versions of The Cinematic Life have been published, each with a different ending. So you can’t know beforehand which one you’re getting. After you’re done, you can read the alternate ending online.

Pasi Ilmari Jääskeläinen has described The Cinematic Life – a novel as a tribute to films that are larger than life.

Movie buffs will find frequent references to the world of cinema. A film adaptation of Jääskeläinens’s first novel The Rabbit Back Literature Society is in the works.”

About Souls Walk in the Rain

And finally, for no reason, a picture of my cat: 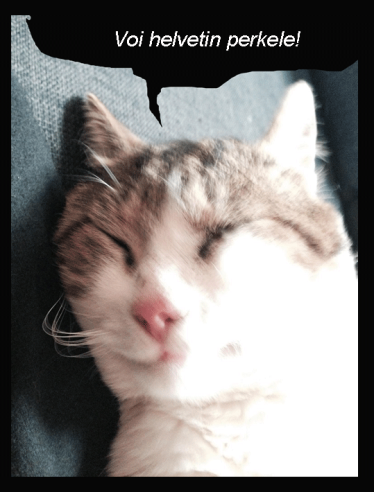